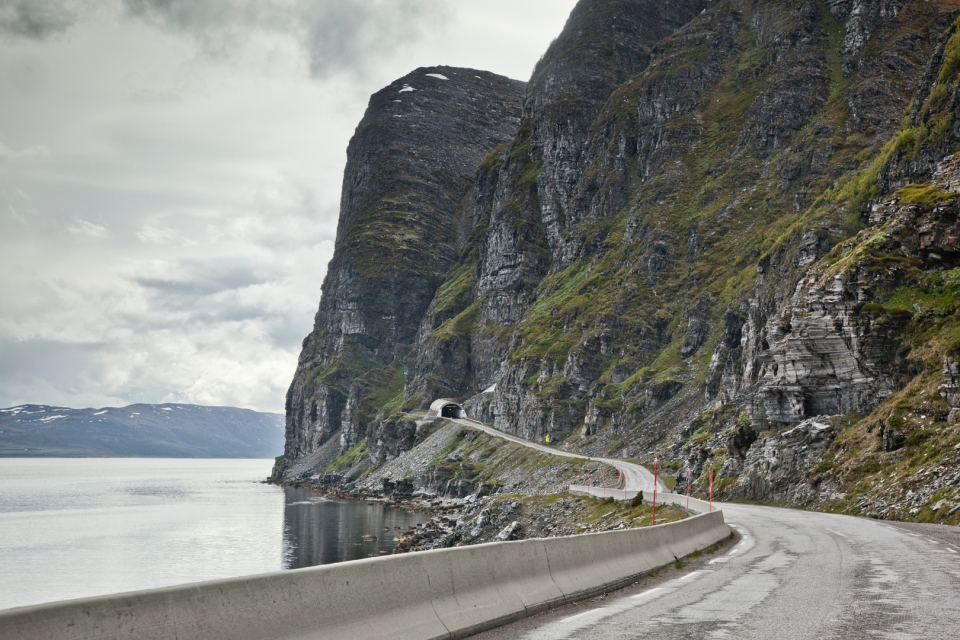 We left Nordkapp with fond memories and a promise, while I was leaving Nordkapp for goo Seumas would now return. He had landed a summer Job with the North Cape Experience and our plans had now changed. No longer driving back through Europe together we would part ways, I would instead fly while he spent a summer in the north fishing. Although logistically this was tricky it meant we had a few extra days to explore the Lofoten Islands and prolong the adventure in the place we had come all this way for.

Two days of driving and a lot of tunnels brought us to the middle of the Lofoten Archipelago where roads grew small and the mountains grew taller. We were moving south without rush enjoying instead the chance to linger and explore the many hidden wonders of this spectacular place. Finding a perfect place to park and sleep wasn’t difficult, our options were plentiful. Eventually settling on a sandy beach we took little time in convincing ourselves to run up the hill nearby after dinner.There was a wonderful spontaneity in climbing just for the sake of it- our reward always being a spectacular view and to look back along the narrow sounds and hidden valleys.

By good fortune we had arrived during a short window of still, sunny weather and from the summit decided we could paddle around the peninsula leading away from us to the east. We could see in the sound there was a strong tidal push but figured if we stayed close to shore we could figure it out as we went. Paddling albeit a little cautiously without the tidal information we set off along the coast. We would round Leknes Peninsula before walking back across the neck to the car. Chasing Sea Eagles along the shore I enjoyed being hot for the first paddle in a long, long time. At our side calm sea glistened and cliffs rose impressively ahead of the bow. 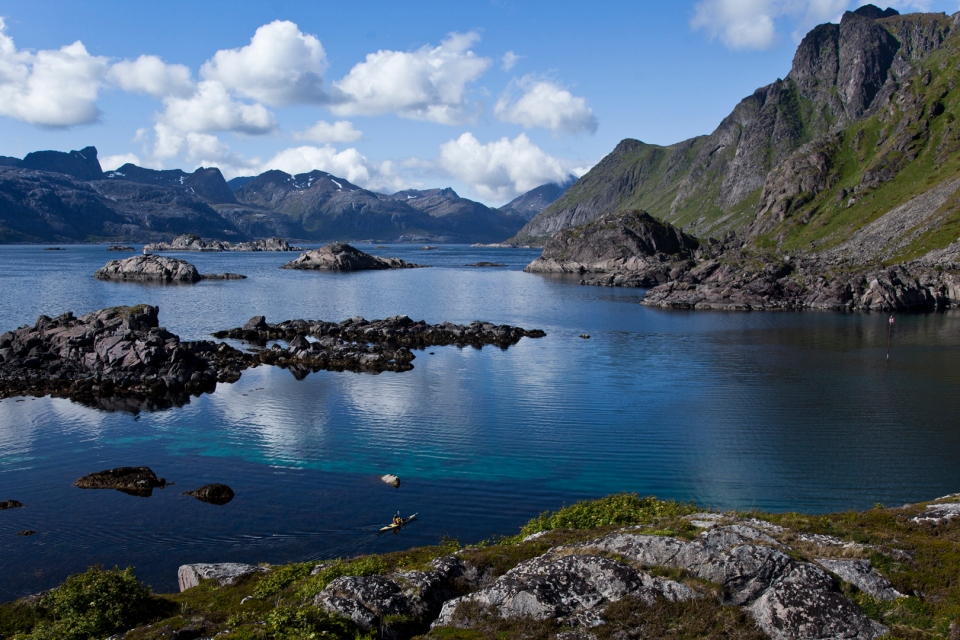 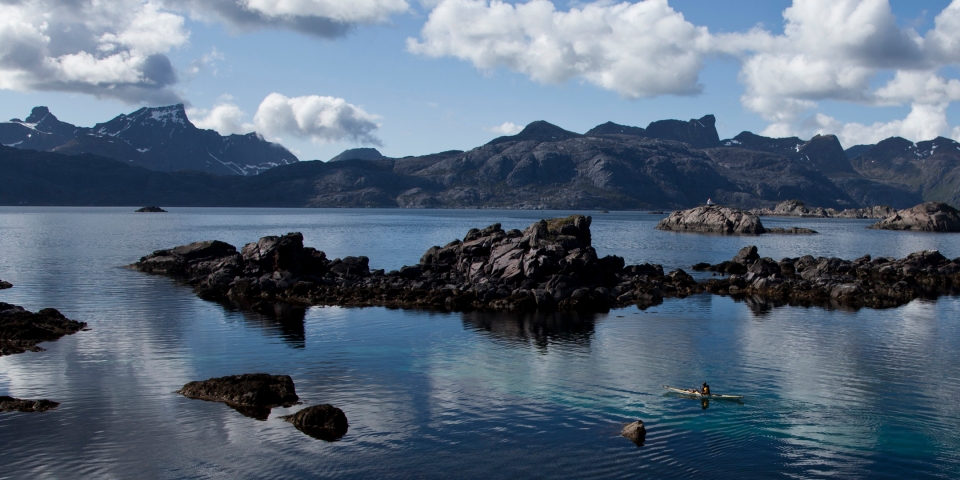 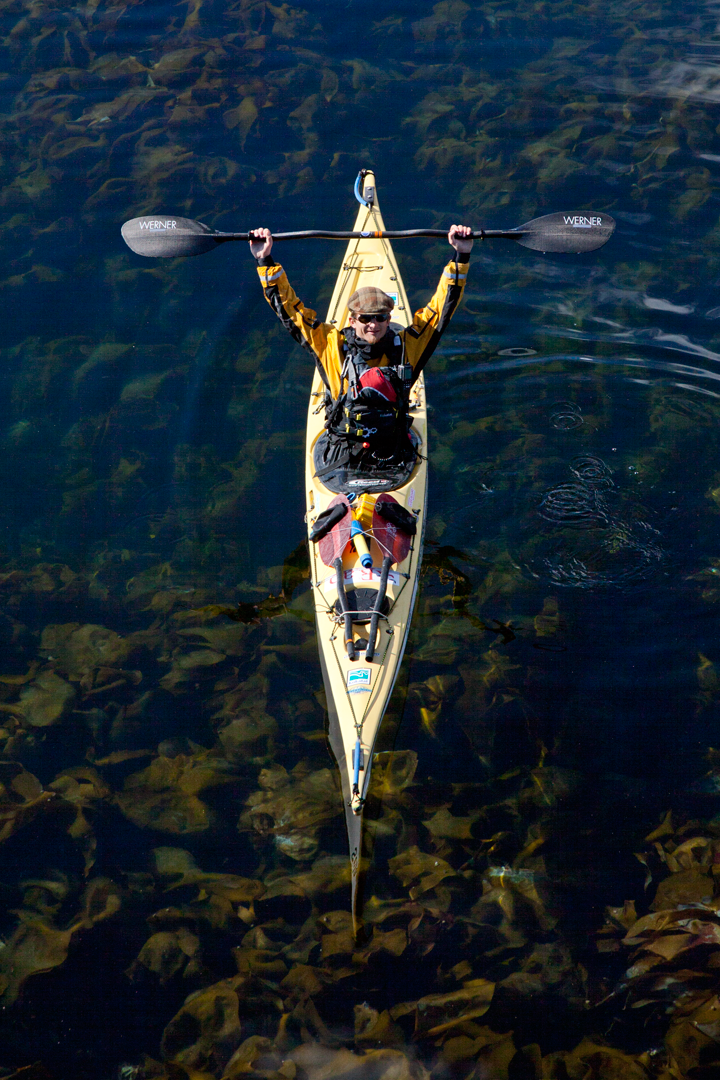 Landed on an island for our lunch we watched shoals of Mackerel bubble on the water. The tide had turned now pushing us back toward home. This was what it was all about, relaxed and rewarding, warm and comfortable and with no worry of the night and where to camp.

Over the next few days the wind  would strengthen so we roamed the coast by van and on foot exploring the roadside and hidden bays. Each evening we cooked on driftwood fuelled fires eating dried reindeer and picked herring which were cheap in the shops. Everything we found about Lofoten was alluring from the light and landscape to the people and the welcoming culture. 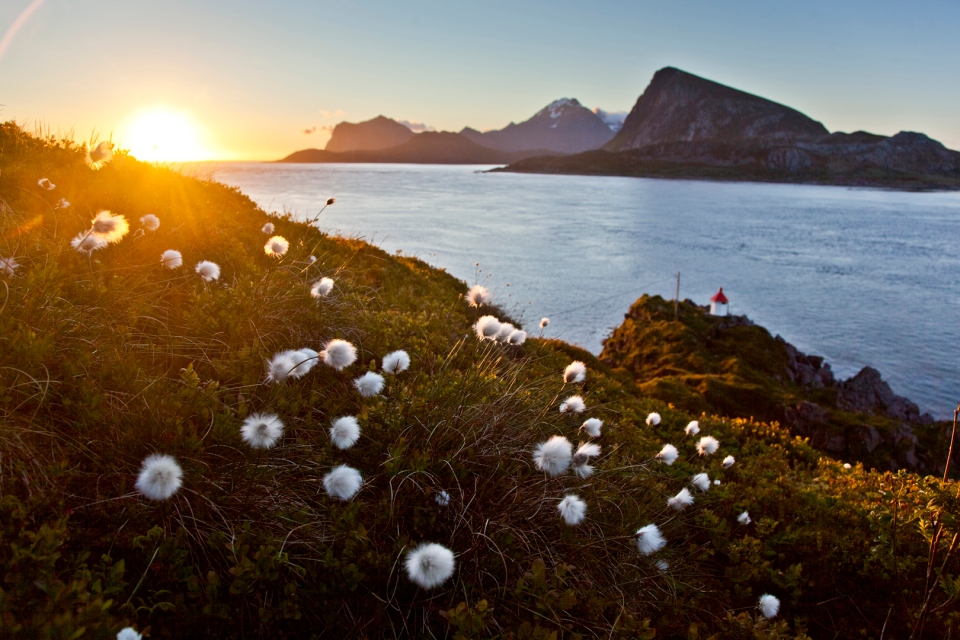 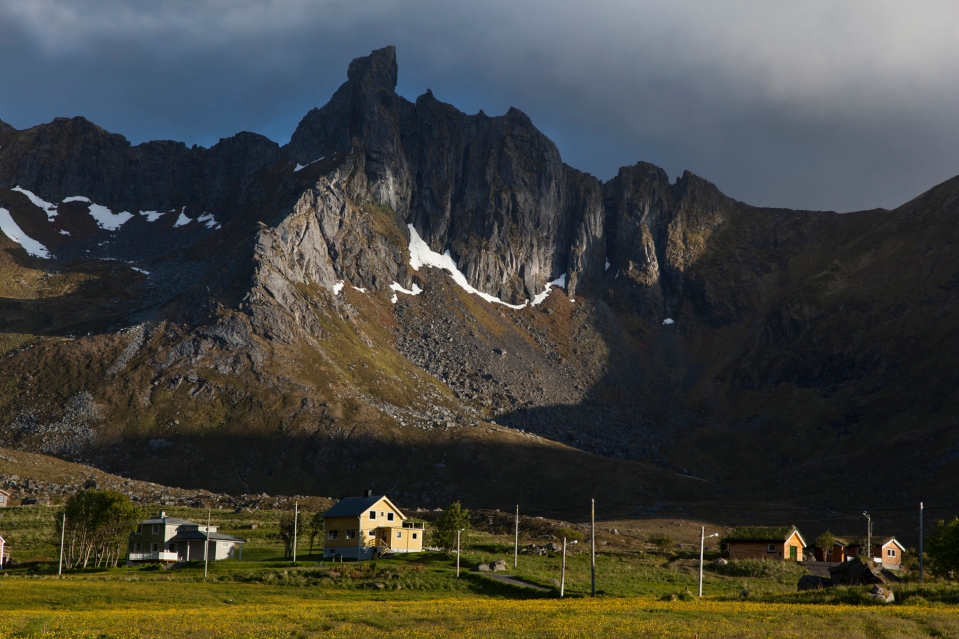 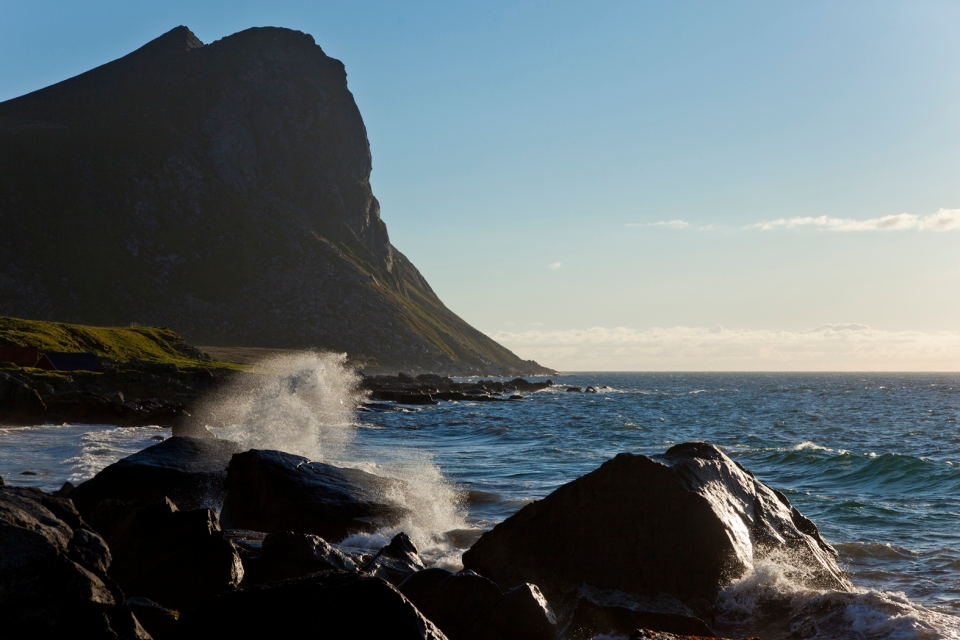 Just go now! Said the salty haired and smiling owner of a local kayak shop. It was 8pm.

We arrived in the little town of Reine late one evening. Perched on the rocks the iconic wooden red buildings seemed as much a part of the landscape as the magnificent mountains which surrounded every horizon. Reine was almost the very end of the part of the Lofoten archipelago can be accessed by road and felt at the end of the earth, the air was filled with the smell of fish which dried on racks in the crisp sea air. We had come to seek shelter in the fjords and on talking to the locals had quickly been persuaded to make another race against the weather. Just like in Nordkapp we had arrived late to go on a spontaneous adventure one day ahead of a storm.

Planning only a short paddle we had now been convinced to venture west to Reinefjorden with a new mission; climb a mountain at midnight. Hermannsdalstinden- was the tallest peak on the island and just a short kayak away, the sky was clear and our was energy high. 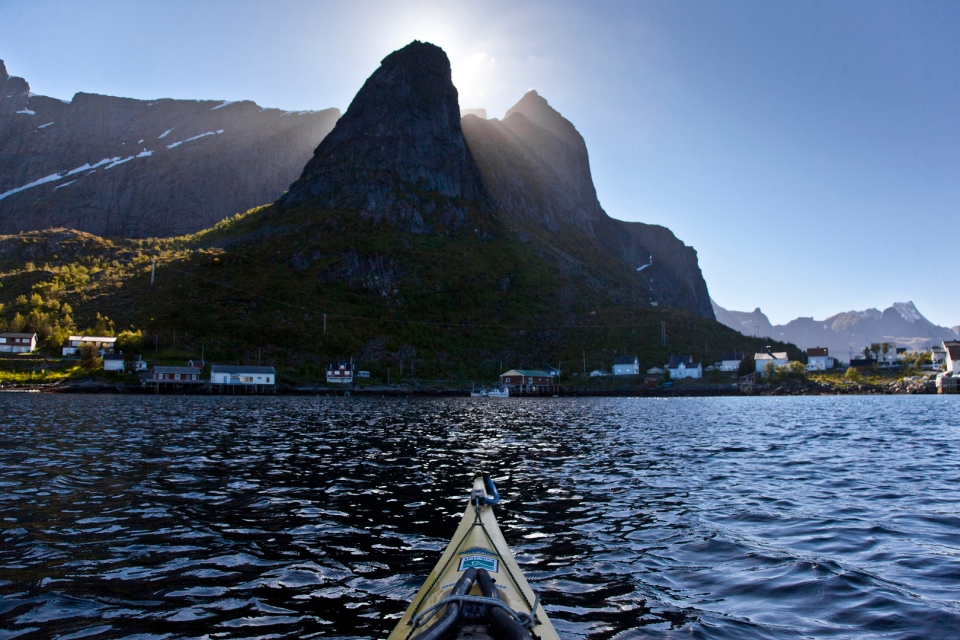 Approaching the end of a sub-fjord (Forsfjorden) we landed and set camp on an old grassy road next to a small hydroelectricity plant. It had taken an hour to get here since leaving Reine and yet already we felt lost with a wonderful sense of remoteness. While I set the tent Seumas paddled back into the water in hopes of catching dinner.

Arrggg! -I’ve got a monster, he bellowed after a while. Turning to see him swing hard with his paddle before a mighty twack I cheered. He returned with perhaps the largest Pollock I have ever seen which filleted and fried alongside our tasty TentMeals instant dinners was much more than we could eat. We certainly had enough ‘fuel’ for our legs and at 10pm set out on foot to the mountain.

There was something that felt fundamentally wrong about setting off to a mountain at 10.15pm. Coaxing tired legs into action we plodded at a steady pace up a steep rocky slope, spurred by the sight of the sun and the promise of warmth on the ridge above.

Watching shadows grow longer on the mountain we looked back to the fjords and beyond. Mountains which rose impossibly steep, bare and rocky from the sea. One even had a striking resemblance to the ‘Half dome’ in Yosemite. 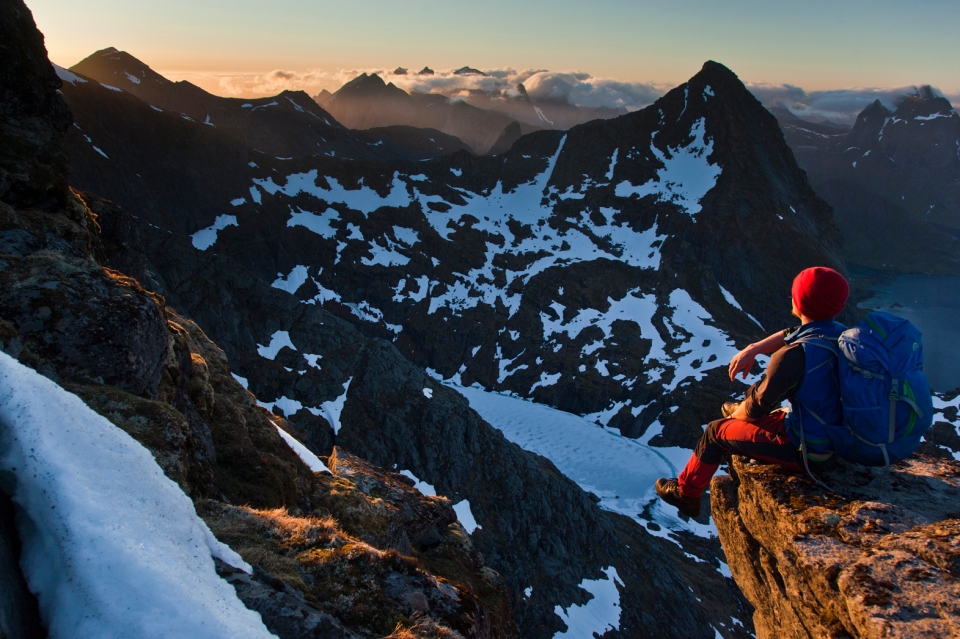 The higher we climbed the better the view became. Snow now covered more ground than not so we kicked deep steps just incase it froze solid in the cooling air before our return. Our focus soon turned to our hands and feet as we gripped the rocks on a final steep scramble to the top enjoying big exposure at our side but grippy holds to pull us upward.

2 hours 30 minutes after leaving our tent we were balancing along a knife edge ridge to our the summit 1029m above the sea. Below carefully placed feet the mountain fell away hundreds of metres into a void of shadow and frozen lakes below.

The sun was barely above the horizon and brought a dazzling golden light to the snow and rock around us. In the distance we watched as a low bank of mist swirled around endless peaks fading into the distance. Far below we could see enormous waves crash around the southern tip of the island- the famous Maelstrom tide races. There was no longer any doubt in my mind that with the degrading forecast we would not go there- that box would remain un-paddled and un-ticked for another journey.

We sat on the top for well over an hour. Simply soaking in one of the finest views I have ever enjoyed I sat in silence. We had so nearly not come here and now that we had were so glad we did, it was and is always worth putting in the extra effort.

It wasn’t until nearly 5am that we arrived back at our tents shattered a strange blend of exhaustion  and energy from the mountain views. It didn’t matter, tomorrow the storm was coming and once back at the van we could eat and rest. 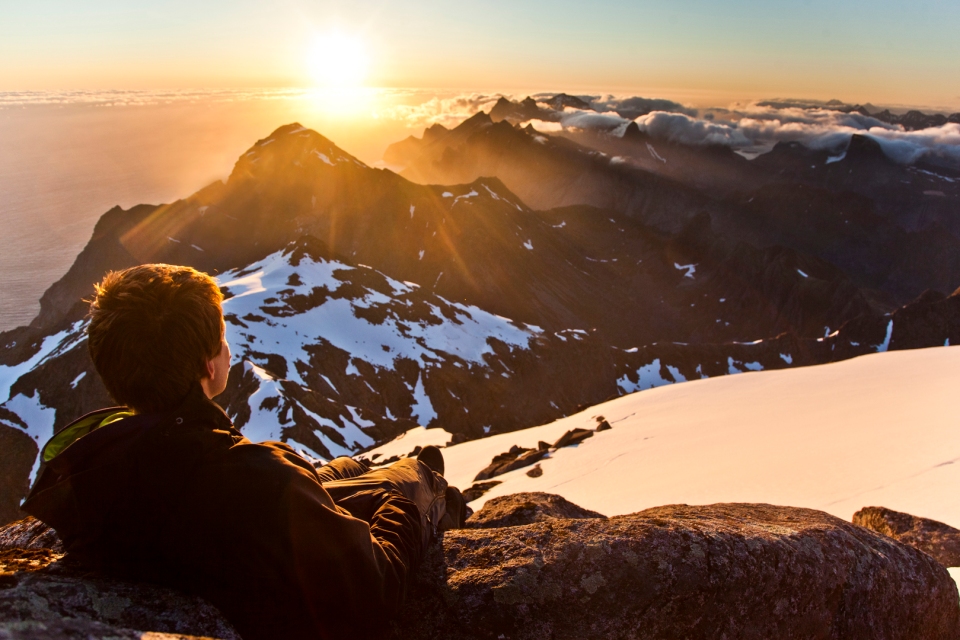 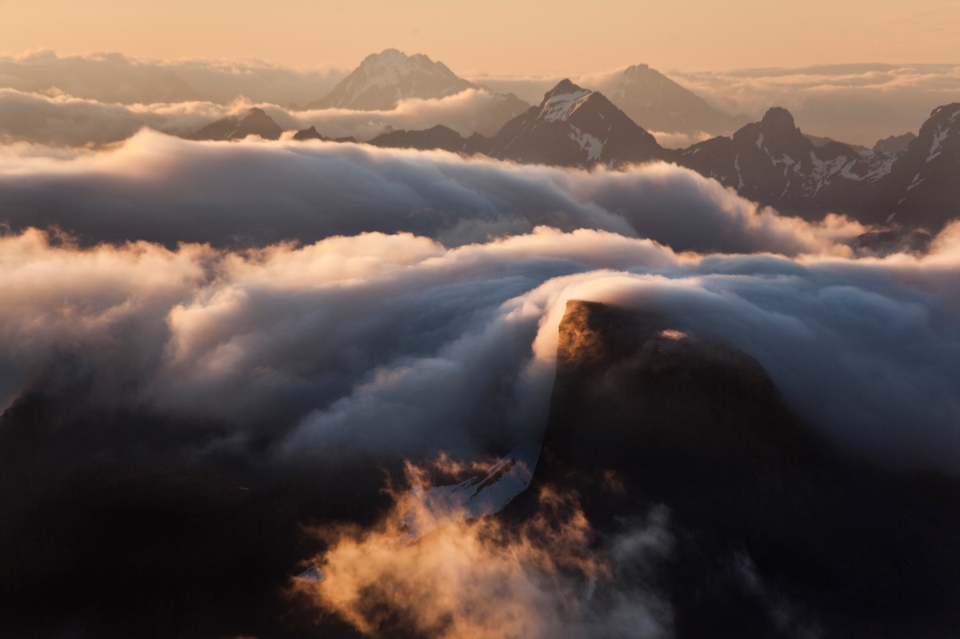 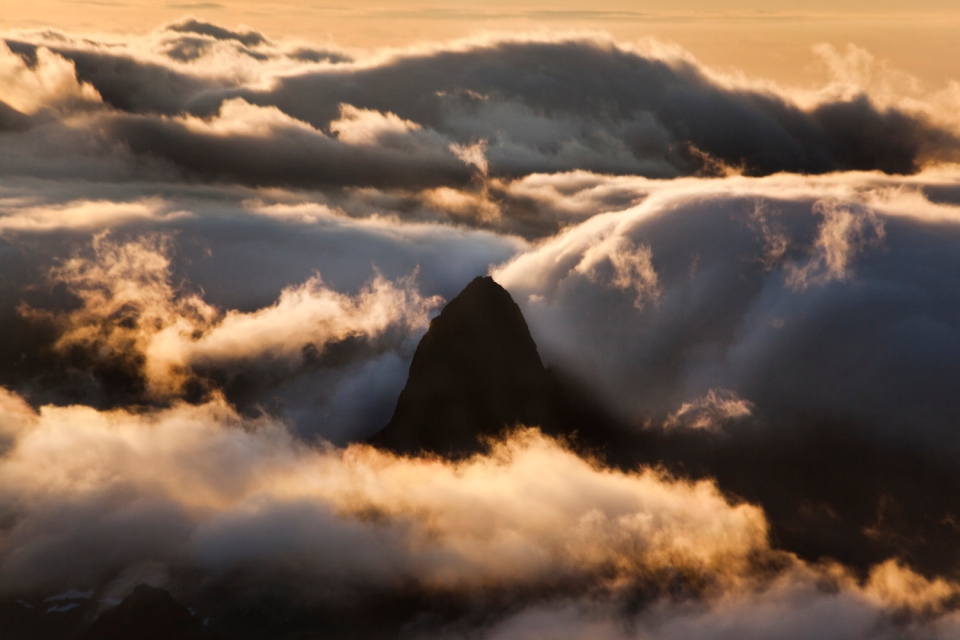 Sneaking against a strong tide which raced at several knots through a narrow gap, we approached Bunesfjorden, just a short paddle from our tent. A fierce wind now gusted down off the mountains with a strong familiarity to that in Patagonia. The gales had been building all morning. Both of us were mentally exhausted, the few hours of sleep seemed to have actually made me more tired, yet we knew we had to get going. Peeling on our damp clothes and returning to the kayaks we hoped to reach one last bay in a race against the building wind.

The ‘hidden’ wonder of Bunes bay was a short walk across a hill to reach the western side of the islands. Even in the grey weather the impressive walls of ice sculpted granite were beautiful to look at. Far below beyond a wide sandy beach we could see waves breaking white as the wind tore against the tidal races running north along the coast. It had been a good call to shelter in the fjords the last few days and not go there. Cold and tired we didn’t linger long and our return to Reine was an exciting downwind blast. Racing each other,  we surfed the building waves with playful excitement arriving just in time in the harbour as spin-drifts started to whip between the fishing boats tied ashore. Back in the van we collapsed in the car-parl. If we ever woke up we figured we would hit the road and head north to one last fjord before the end: TrollsFjorden.

The beauty of the Lofotens was the ability to ‘pick and choose’ an adventure to however you liked it. If the wind blew west then we went east and visa versa, no matter how bad the conditions there was always an option to play. By now we had completely destroyed our circadian rhythm and had given in to our own body clocks own time. We wakes at 11-12pm, roam around during the day then adventure by ‘night.’ This way we enjoyed the golden light of the low sun and fewer people on the roads. We could now feel the journey coming to an end. For I a flight approached and Seumas a season fishing waited. We had heard about a spectacular inlet known as ‘Trollsfjorden’ a narrow fjord cut deep into the mountains. Spotting on our map a lesser known valley just to the east  we saw our chance to re-live a little Patagonian ‘fun’- A portage!

Only small drag between the sea and an inland loch we quickly moved the boats into a new hidden world. Few could make it here and the sense of wilderness quickly returned. We were lost beneath foggy mountains and in the rain everything seemed infinitely greener than anywhere we had been so far. A short and gentle paddle took us to the end where as usual I set camp while Seumas fished- this time dinner was Trout with our cous cous.

It seemed fitting to end our journey in wind and rain, what would be an adventure with out it? Pushed by a following wind 7km in less than an hour we veered into the wide ‘v’ of Trollsfjorden ducked against fierce punch-downs of spray. Above us bare rock shed the rain in cascading waterfalls which roared and danced on the waters edge. This was definitely a dramatic and epic enough place to imagine Trolls hiding. Beyond here a last fight of wind, a final few days on the road and for Seumas and I the parting of ways.  After two months together we were now off  to pursue our own separate adventures.

Posted on October 30, 2016 by willcopestakemedia