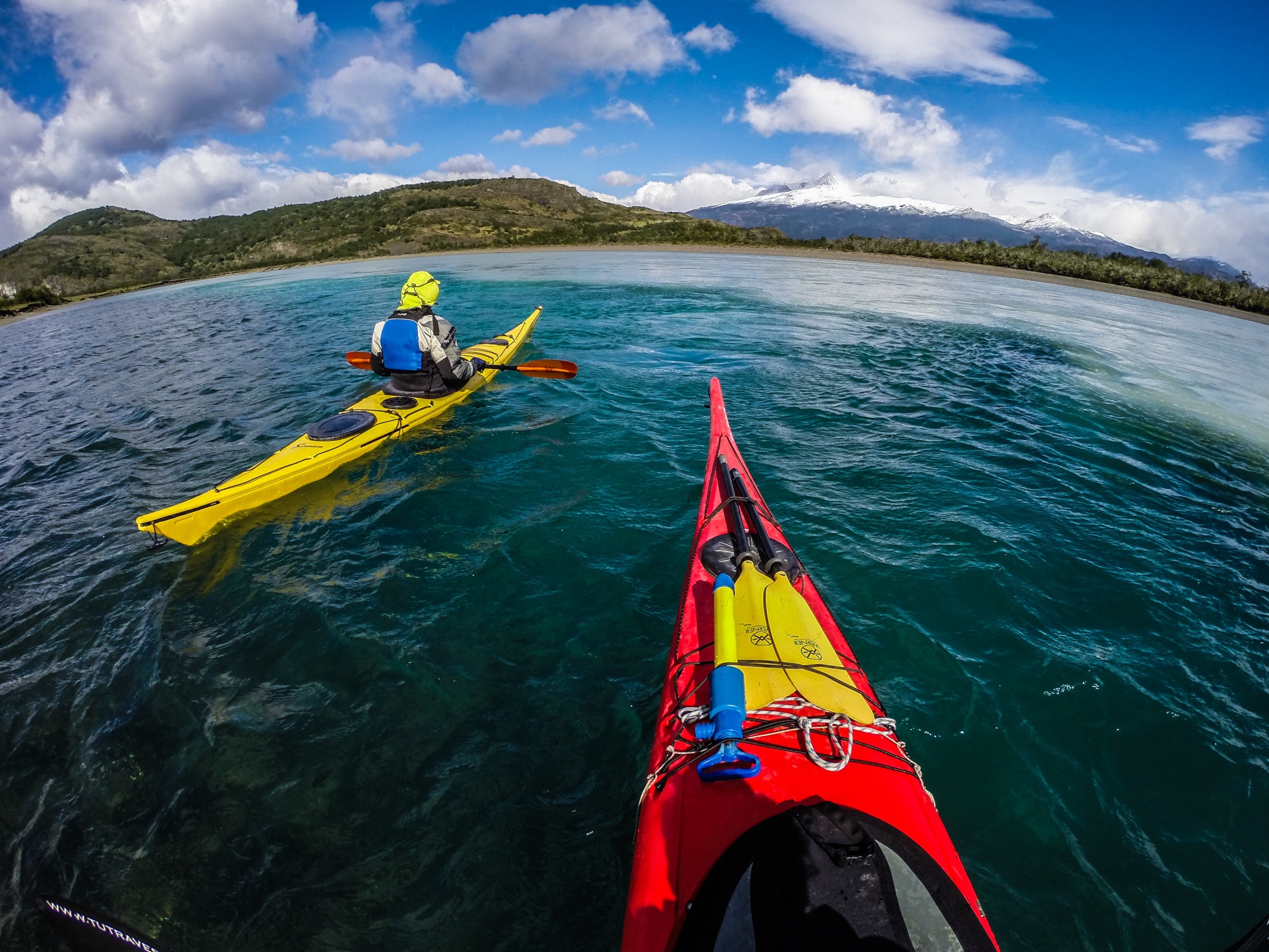 Life as a guide on a micro-kayak Expedition

Flowing from the Torres del Paine national park the Rio Serrano joined by the Rio Grey meanders gently to the ocean. Passing into the less frequented Bernardo O’Higgins national reserve the river is the best pathway into true Patagonian wilderness. Both the Rio Grey & Serrano flow at relatively flat grade 1-2 however are made challenging by consistent often gale force winds. The harsh climate makes each journey unique be it under sun, snow or spindrift.

If you would like to experience the magic of Patagonian paddling for yourself it is possible to book trips at:

My first experience of the Rio Serrano was intense and somewhat intimidating. With my new flatmates, colleagues and drinking buddies Gary & Dan we set out together onto the river.  Under the guidance Chilean paddling legend and our new boss Herman we were being tested to work for his company Tutravesia; the ethos was if we survived the wind we would be good enough for the season. Famous for his covert journey down the straights of Magellan to Cape horn in a blacked out kayak so as to avoid the Chilean navy Herman was in his element. Deliberately paddling in the worst possible forecast we were in for a rough few days. 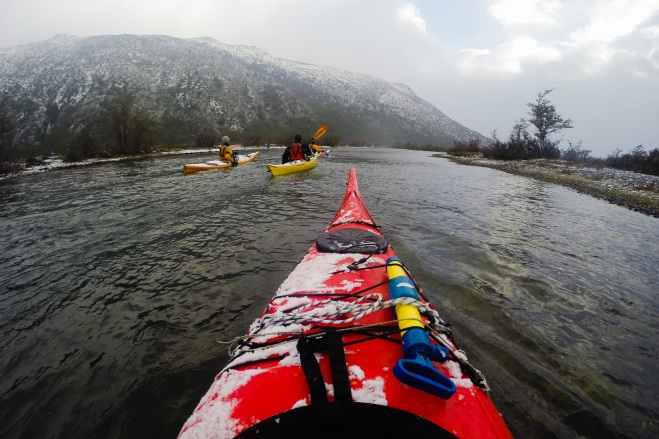 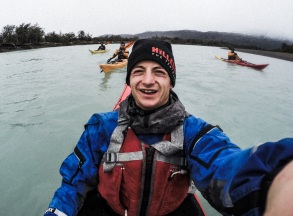 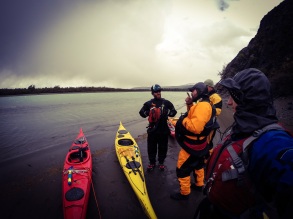 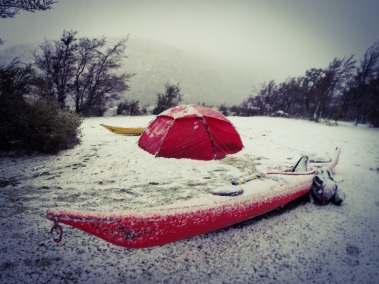 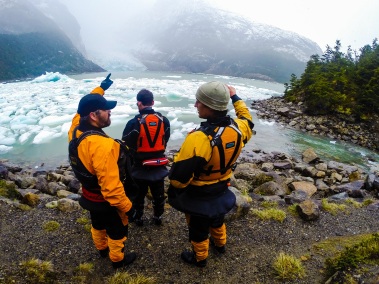 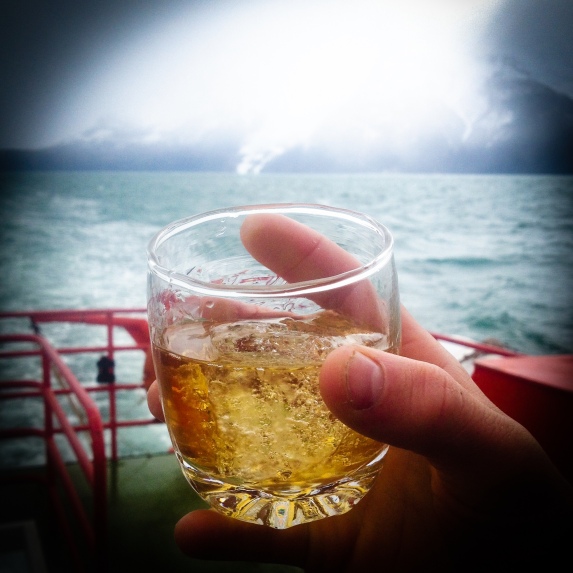 On the crystal clear Serrano water we took advantage of the rivers many meanders to shelter from the wind which thundered over gnarled birch woodland like an oncoming express train. Short stretches of gritted teeth and spray were interluded with gentle calms interrupted by  a flurry of information. Before long we arrived at the confluence of the Serrano to the Rio Grey, here the water mixed into beautiful azul blue before turning milky grey with the suspended river dust. Although higher volume the Grey river now took the Serrano’s name for the rest of its course. We relished the extra flow to help push us into the wind.

The Serrano river has only one waterfall; The Salto Rio Serrano. Although only a few meters high it was enough to merit a portage, it was tempting to run but on close inspection the sharp rocks below it seemed unwise without a helmet. Carrying the laden boats around the fall offered a brief respite from fighting against the wind. Once on the water we couldn’t resist a playful explore of the currents below the falls.

With Herman shouting directions to eddies or shortcuts over the wind we tried to learn fast: Don’t paddle in this eddy, Make sure the clients don’t paddle in wind this strong, this makes a good campsite were all useful tips which we never heard over the gales. In the grey mist the term ‘Over there is a spectacular mountain…but not today’ became frustratingly regular.

Where the river opened wider and flowed away from the trees we were forced to beach the kayaks, it was now a case of clinging onto the shore bound boats so they didn’t blow away. After half an hour being battered on the rivers bank I was cold, even in the dry-suit the conditions were tough. Thankfully we could drag the kayaks on a line until the next bend where the water grew sheltered once more. Our day turned became a conflict of battles and breathers between each turn. With relief we reached a small tributary to the river and were relieved to be directed into its flow, we had arrived at the Rio Tyndall. Leading to the Lago Tyndall and glacier of the same namesake the smaller stream meant more towing than paddling, I was relieved to be out of the worst gales and see the imminence of a campsite.

To sheer surprise our chosen forest campsite was surprisingly sheltered. With tents and a tarp soon erected we set about devouring the little luxuries only kayak camping can bring; wine, fresh veg and steak dinner.

Waking to a centimetre of snow coating the tents and our boats we huddled over porridge, eggs and coffee before eagerly jumping into our drysuits and getting on the water to warm up. Returning back to theTyndall we enjoyed the push of the river and wind at our stern to help us back to the Rio Serrano. Back in the main flow we turned south and into delightful shelter from a still howling gale, in the perceived calm and golden morning light which glistened on fresh snow I caught a glimpse of the true magic of the river for the first time; it made the hard work worth every frozen second.

Finishing our journey at a small wardens office called Porto Toro we beached the kayaks and waited for a ferry home. We had achieved the normal 3-4 day program in two rushed and tough days on the water leaving just enough time to wander to the Lago Serrano and peer at the icebergs drifting around the lake.

A 5 hour ferry ride home gave a chance to appreciate the spin drifts from the comfort of a cabin, plied with whisky on glacial Ice we joked that it was the first time to have a dram just for the rocks. Chasing the drink with a colossal lamb lunch we returned to dry out in Puerto Natales. We had passed the test and were officially considered fit to guide, but as we watched the wind howl outside there was a distinct sense of daunting dread at the idea of taking clients into such conditions.

Returning to the Rio Serrano in glorious sunshine and a first sight of the spectacular vista over the nearby Torres del Paine massif I felt like I was in a whole new river. This time I arrived with a burden of responsibility, under my guidance were my first ever clients in a tandem kayak. I was’t worried about the kayaking, nor about rescuing should they capsize, instead I was nervously trying to remember all the points shouted over the wind and fretting over the weather ahead. The idea of guiding on a river I had only seen once between gasps and crashing waves was a little daunting, but I was going to give it a damn good go. 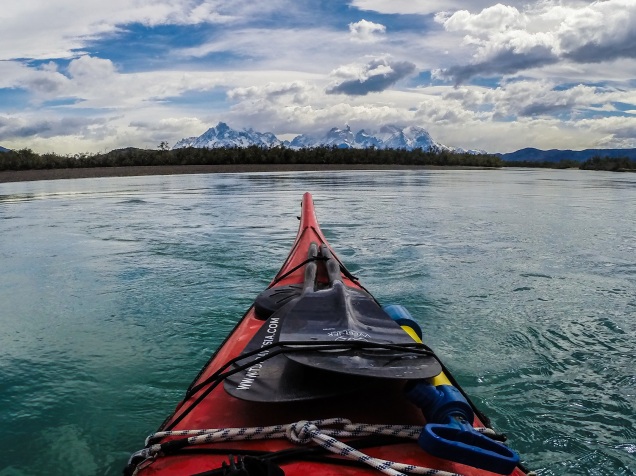 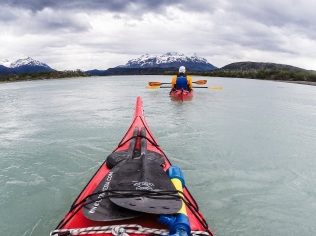 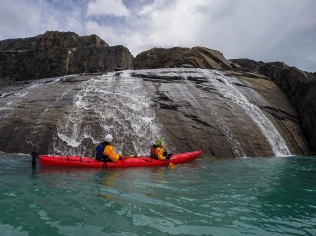 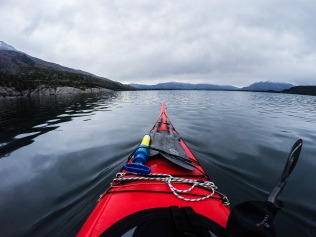 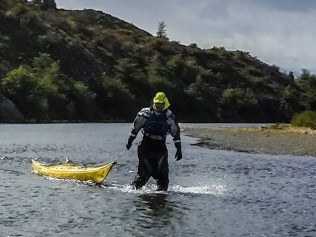 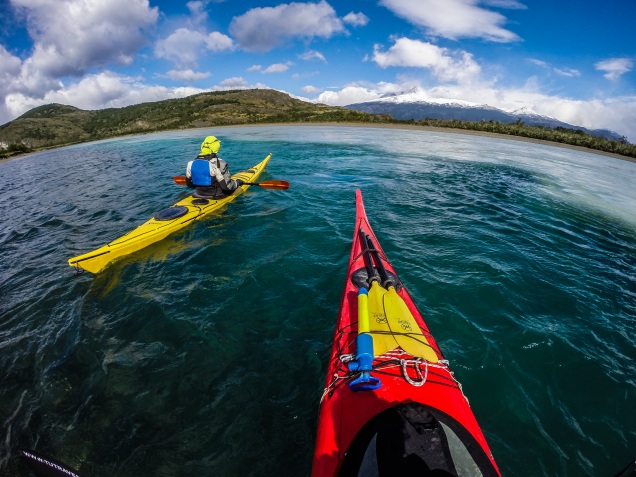 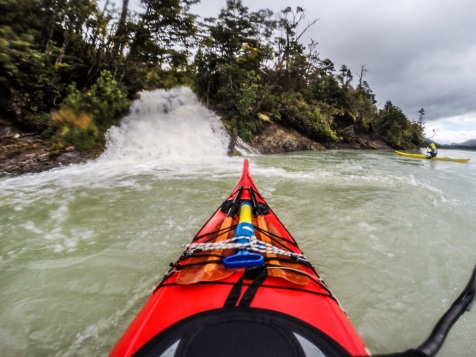 My newly-wed German clients had paddled before but were not the most experienced, behind the tandem kayak I quickly learnt why the other guides nicknamed them as ‘Couples Therapy.’

The greatest advantage of patagonia’s unpredictable weather is that when the weather forecast is bad it can only get better and on our first day it did just that. Almost 0 wind, perfect sunshine and ideal river conditions meant I was more worried about sunburn and heat stroke than capsize or hypothermia.

Comfortably reaching a lakeside camp at source of the Rio Tyndall we spent an evening enjoying wine and steak in the shelter of tall Calafate bushes. Living up to stereotypes and immediately stripping off I was impressed that they dared take a skinny dip in the glacial fed waters.

Once on the four day trips I could take responsibility to where we went, where we stopped and how far we paddled; the official program took us downstream and intended to skirt an extremely committing and exposed stretch of coastline. With a poor forecast looming (unpredictably of course) I opted to change the itinerary and take our journey instead to the glacier at the head of the lake. We enjoyed a mirror calm and beautiful paddle before returning down the Tyndall to find a gem of a camp amongst old beech woodland on the banks of the Serrano.

Our final day was calm but wet, arriving early into Porto Toro everyone was cold and soaked. Setting tents between shivering fingers we nestled into sleeping bags and spent most of the afternoon drinking tea and relaxing. With a short wander to the glacier and back to see a spectacular ice fall just in time we returned to another dinner. In the morning we would return for a short paddling amongst the icebergs should the weather allow.

Pushing through lumps of ice with my bow I led the way through a field of small bergs, head ducked against the wind we skirted the edge of the lake to reach the front of the glacier. A quick drift, some photos and whoops of awestruck joy later we turned from our safe distant vantage and returned to the ferry. Once on the deck beside the contently sleeping couple I breathed a sigh of relief over my glacial whisky, I could guide on this river, and perhaps just as importantly I could have fun doing it. 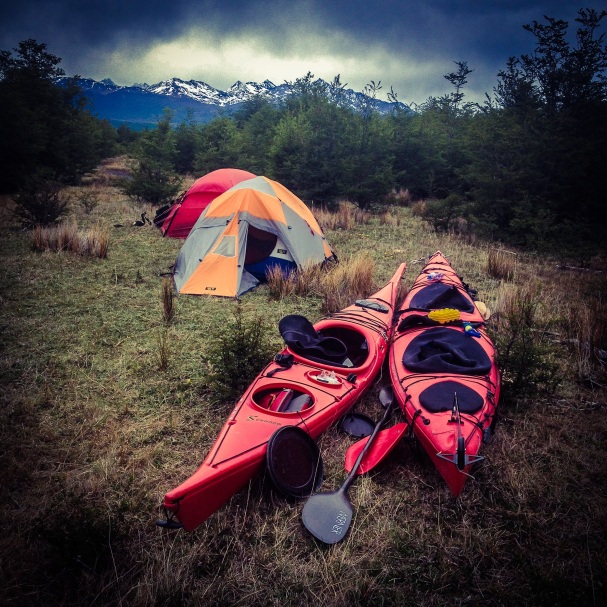 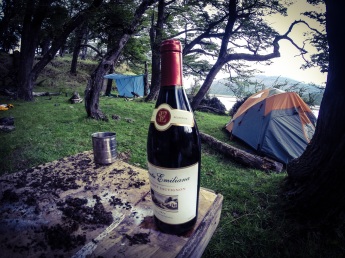 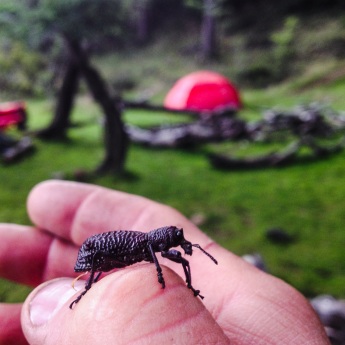 As the season begins to pick up we have noticed more tourists arrive into Puerto Natales, we now wait ‘on call’ for our next journey which can arrive at any time. All three of us have now led successful trips on the Serrano, with a competitive spirit we have agreed for every client capsized we must buy the other two guides a beer, for every tandem capsize we owe a crate. My second trip was with a dream client, an Australian doctor who was well experienced, easy conversation and happy to take shorter days to truly embrace the Chilean spirit with a siesta; For making such an easy trip I didn’t mind buying the other two guides their beer upon returning.

Most recently I have taken a couple of trips on the upper reaches of the Rio Grey. Here the river is narrower, the current faster but still flat it passes through intriguing canyons to the backdrop of the Torres massif. Most excitingly the Grey offers the chance to paddle next to colossal ice bergs which tower high over the kayaks in vibrant blue. It is an experience I don’t think I will ever tire of. I am still slightly nervous of taking clients in such harsh conditions, but I think this is an important aspect of safe guiding and helps to avoid the biggest danger; complacency. For now I am genuinely excited to get back on the water and look forward to re-seeing the same river with fresh company over and over again. 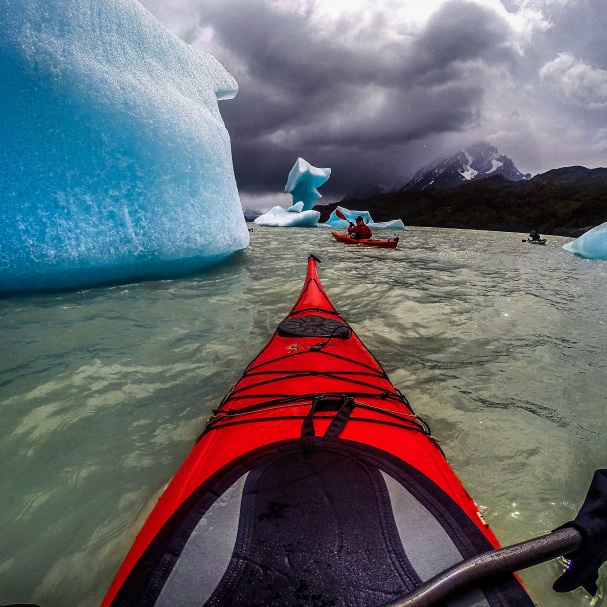 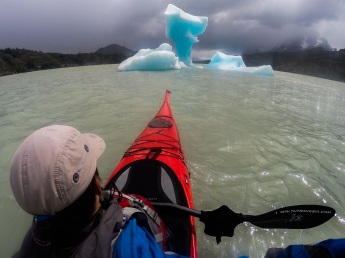 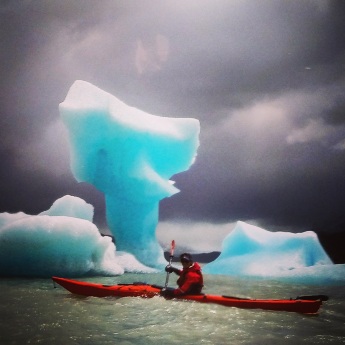 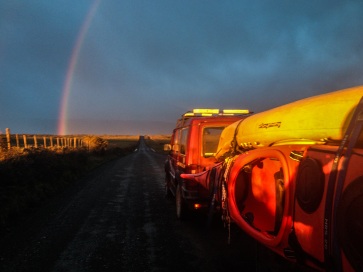 Posted on December 7, 2014 by willcopestakemedia

5 Comments on “Paddles in Patagonia”