The Final Day of the Munro Journey

This time last year I was about to set off for the second time. I had paddled for a single day only to be stormbound for a further two. This time I would leave my father and paddle alone. It seems like another life ago, those memories mixed in a cocktail of anticipation, fear and excitement now washed and blown behind months at sea and in the mountains.

1655km in a kayak, 2510km on a bike and 1720km on foot across 282 mountains with a total climb 146963m had taken its toll on my kit. My boots were worn and trousers ripped but what remained was a smile and memories which nothing can ever take away.

Pedalling under a huge banner which read boldly in thick black paint ‘Will 282 Today’ the enormity of the task I was leaving behind slowly started to sink in. 364 days of paddling, pedalling and pushing up mountains had almost ended, and in what better way than in the company of friends and family.

In a large procession we rose toward the summit cairn. Our group age spanning over 60 years. Taking it in turns we carried the Scottish Flag attached to my homemade kayak paddle before Seumas (Childhood friend and virtually a brother) took upon the task to bear the flag. We took turns in encouraging the younger children, the youngest at just six years old along the track, sometimes carrying sometime racing to catch up.

Heading up the mountain

Atop the first peak we met yet more friends who had gone on ahead anticipating a faster pace, they were much faster than expected so more than welcomed the warm tea and a quick warm up before moving on. We had a last glimpse of the views to the west before the cloud descended for the ridge.

Cold on the Southern Top 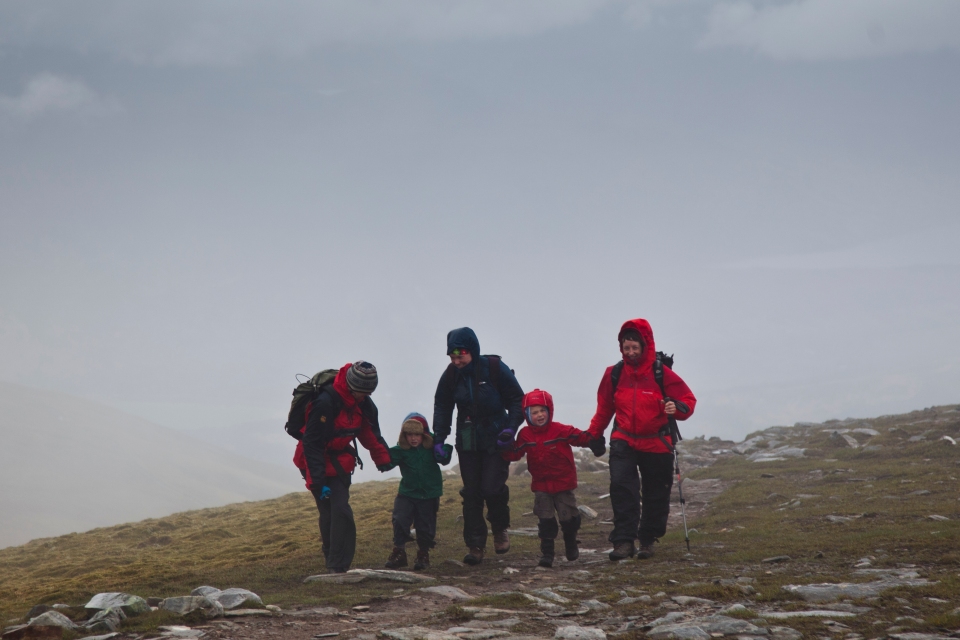 Some needed a little encouragement

A quick 2km trot along the wide and blissfully soft mossy summit lead us to the hallowed trig point. Arriving almost last in the group with a few of the younger kids a tremendous round of applause erupted and the champagne corks popped. Most of the champagne ended up all over the place as the foam blew around in the wind. A quick and shameless pose on the summit later we joined together to film the final starjump. Watch this space for the upcoming compilation of my jump upon every summit along the way.

I finally sipped my victory miniature on the cairn before passing it around the crowd. The little dram of whisky given to me by my godfather Ben Osborne. Like the cigar in the film independence day it sat in my Rab jacket through the entire journey for ‘death or victory’ thankfully being used for the latter. slàinte!

Standing on the final trig point

We also celebrated Orin’s first ever munro, triumphant he asked his mum how old I was so that he could try and do it all younger. . .I sense a little friendly competition in the future here..

A first munro for some

The gang on the top

There was little hanging around the top and we all descended to Ullapool to warm up around a bonfire and eat lots and lots of curry.

Not much of a change from Start to Finish

In the fine words of Dave Ghrol: ‘Done Done, Onto the Next One’

Posted on May 15, 2014 by willcopestakemedia

← Ben Lomond and the Arrochar Alps
Solstice on the Sea →

2 Comments on “Machair to Munro Completion”