Ben Lomond and the Arrochar Alps

Ben Lomond and the Arrochar Alps

Whisked from Loch Lomond to Edinburgh to briefly say goodbye to my sister Emma before she flew to France and then back to Loch Lomond in 24 hours had left me groggy and tired. A 5am start rewarded with a superb sunrise helped to perk up the morning stupor. With my poor in-car navigation and Paul’s ‘Instinct’ we made it to the bottom of Ben Lomond with just three U-Turns and only a couple ‘scenic detours.’ In the same way I had begun my kayak journey in company I would start the munro section with Paul and Kate (Mum and Dad).

From a busy car park filled with fellow hikers we joined a steady stream up toward the summit. The climb was on a wide and good quality track which wound from forest onto a long gradual ascent. Regular stops for tea and crisps were made in the mist, I relished the ‘Parent pace’ as an introduction to the hiking stage.

Parents on the ridge

Mum climbs into the mist

Dew on the webs

Doubling back to chat to mum as we neared the summit we watched as Paul suddenly burst forward in a fit of speed. His motivation quickly became clear as a break in the cloud emerged around the summit. ‘Quick!’ he hollered back down to us ‘Brocken Spectre!’

For those who have never experienced one a Brocken Spectre is a magical natural phenomenon and a rare treat on any hill. To have a chance of seeing the illusive rainbow halo around your own shadow you must be stood above the clouds to cast your shadow upon them, you also need to have sunlight above.

The steep slopes and a cloud inversion on the summit produced the most vibrant Brocken Spectre I have ever seen. A great start to the munros! On the top a small trig point stood on a rocky slab, a crowd of 20 odd were already there to celebrate the last munro of one of their group. 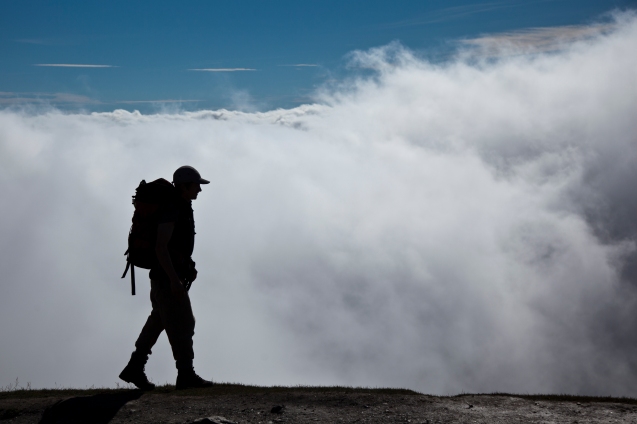 Raptured by the sun

Lingering in blazing sunshine on the top we gazed awe struck at the spectres and fog bows glowing in a sea of cloud swimming around the summit. It was warm enough to wear a t-shirt and a stark contrast to the wet misty ascent.

Happy Family on the Summit

Kate & Paul look out to other peaks

Well trodden peak in the sky 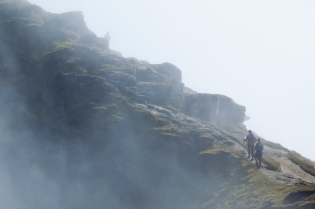 Climbers in the mist below 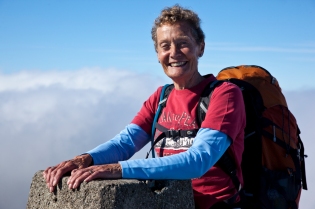 Pleased to be above the clouds on Loch Lomond

To make the day a circuit we opted to make good use of the weather and descend the steeper more scrambly northern ridge back down. At first steep and rocky the track wound through the crags with little vertigo or technicality before gradients became more forgiving. Leaving sunshine above the cloud we doubled back on the large horse-shoe ridge to wander back to the car. Although less maintained and somewhat more rugged the track back down was an excellent route becoming wide and gravelled toward the bottom. We all concluded that it was far better to descend than ascend and that a counter clockwise day (which we had done) was the better option.

I left Portnellan farm the following morning to cycle alone once again. Waving goodbye to the Scott-Parks I made my way back into Balloch for a coffee at the sea life centre. I was back on Sustrans Route 7 cycle track as I followed the western shoreline of Loch Lomond. The route was good quality, wide and off the main road which was a welcome change to the busy traffic. Regular breaks on quiet beaches and in little towns kept the day at a relaxed pace.

I reached the turnoff to Inveruglas early in the afternoon. A well maintained by brutally steep road lead into the valley where busy construction work was underway to improve the hydro-station nearby. Initially outright refused access into the glen by the site manager I kicked up a fuss and stubbornly asserted my rights under the Scottish Access Code. Eventually I was allowed to ride through to set camp further up the valley out of sight and out of mind. 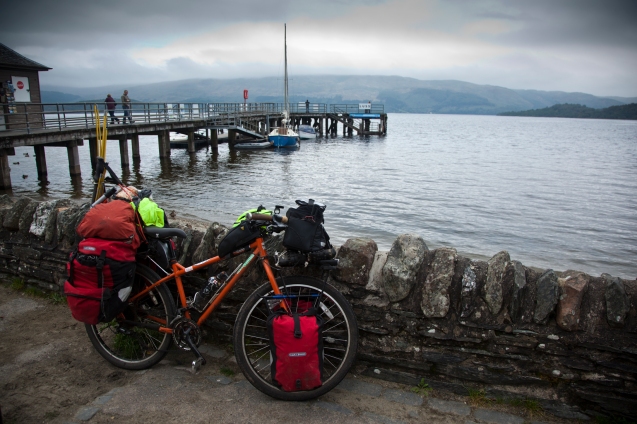 Bike loaded up and good to go. 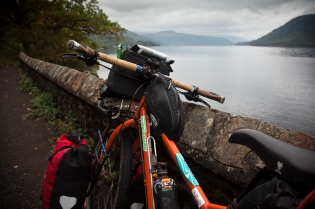 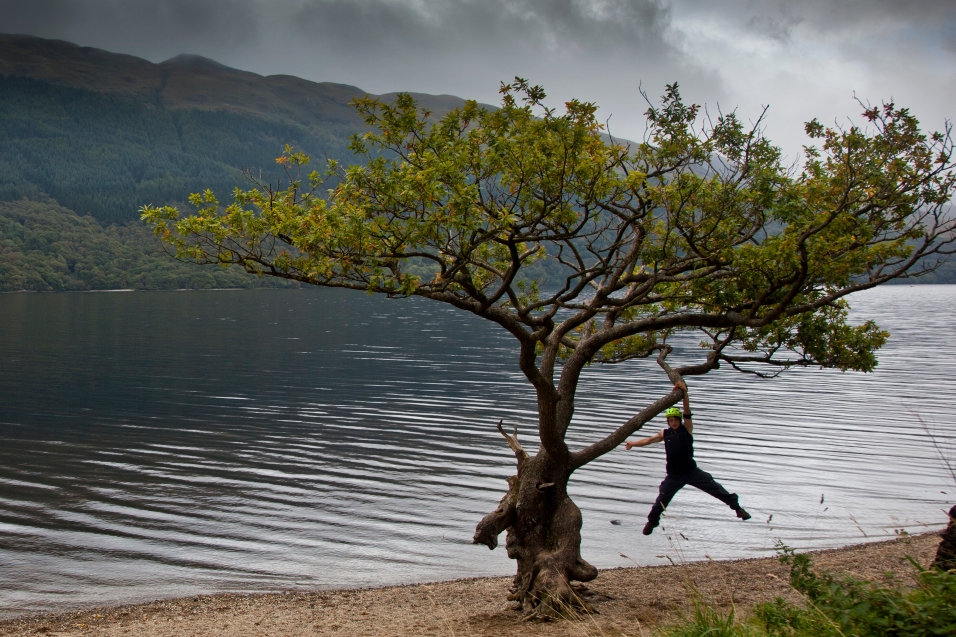 For the first time in several days relaxed bike touring I was pitching tent. Celebrating returning to life under canvas with a bath in a nearby stream and a toasty fire to warm dinner and soul I settled in behind a large boulder to pour over maps for the next few days. 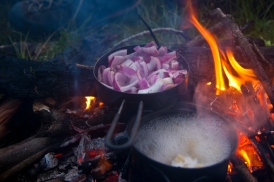 Dinner on the go!

Climbing the steep track to up Ben Vane into a thick mist I ascended with a hopeful optimism for a second day above the clouds. Unfortunately the views didn’t appear but instead I was treated to a great chance to see if my compass work and navigation still stood up to par. The entire day revolved around compass, map and fervent glances to repeating features in the mist. A very boggy descent into a grassy coll between Ben Vane and Beinn Ime left me to climb the rest of the day in wet boots and soaking trousers.

I was glad to see the summit of Beinn Ime, it was a repeat summit which I had done during university and was a welcoming familiarity. The conditions were almost identical to the last time I had stood upon the cairn and I knew there would be a gentle yet boggy descent to the final peak. It is worth knowing that the Summit of Beinn Narnain has two cairns. The first is a large rocky cairn which stands high on a rocky slap as you reach the flat summit after a gradual ascent. Just 50m further on an apparently flat summit plateau lies the trig-point cairn. I did not know this and by sheer chance caught a glimpse through a chance gap in the mist, had it not appeared I would have counted the first cairn as the top unknowingly.

Descending to the east into the coll between Narnain and Ime I slid more than I walked on the wet grass to reach the woods below. From the bottom of the valley a gentle stroll lead back to camp, a fire and a warm meal. I was certainly feeling the long day in my already sore legs and was quickly learning that biking and hiking use subtly different muscles. 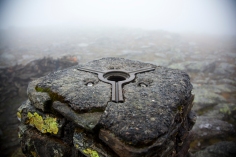 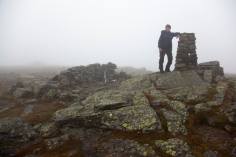 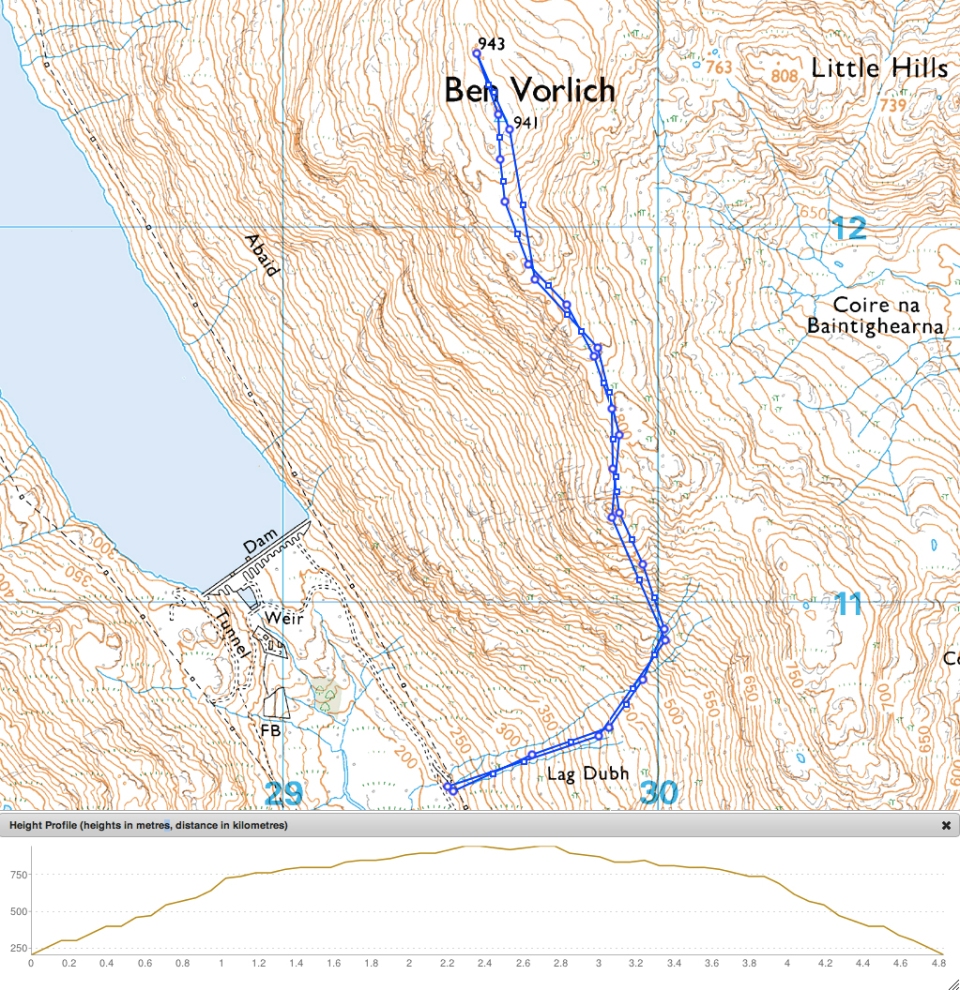 Leaving from the same base camp as the day before I jogged the short distance down the track to reach Ben Vorlich. I hoped to summit and then re-position camp for the next few hills in the same day. The ascent was short, steep and muddy. A relentless gradient path which wound beside a small river lead to the final ridge at 800m, despite burning legs and wheezing lungs it was a welcome short climb.

Once on the ridge the track improved to a narrow trail which wound between small gullies and across the ridges to reach the first cairn. A short stroll further brought me to the summit trig-point. Ben Vorlich is an unusual summit, normally a trig-point marks the absolute top but on this occasion it does not. A further 100m North West along the ridge line is required to reach a small un-assuming cairn which at 943m is 2m higher than the obvious trig point. 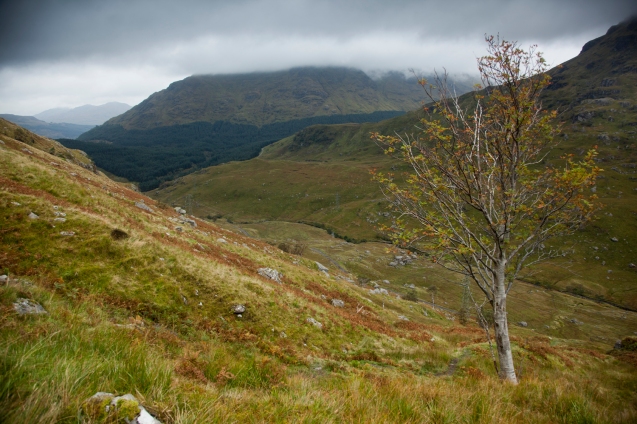 Friendly local on the hill 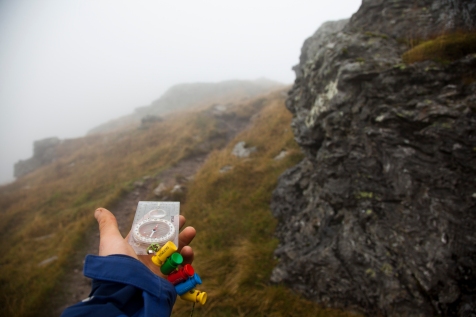 Packed and on the bike for mid-day I returned  back to the waters edge at Loch Lomond. Leaving the cycle trail I wound along the road which thankfully was relatively quiet. Passing the end of the loch to briefly detour for a cup of tea in a roadside bar I found myself playing guitar in the corner for the best part of an hour (its rare to find a left handed one). The lingering meant it was late in the evening light when I arrived at a place to camp. For the first time I set about searching for a ‘stealth camp.’ Unlike kayaking I would be leaving the tent un-supervised for several days, it was so close to the busy road that I wanted to be out of sight.

I eventually found a great site nestled in a gorge in a deep thicket of bracken. Even 10m away it was totally invisible.

Hidden in the back of a field

Posted on March 5, 2014 by willcopestakemedia

2 Comments on “Ben Lomond and the Arrochar Alps”