Setting forth to Esk-ape to the Solway Firth.

This week is kindly sponsored by Laura and Tom Talbot.

I am sat in a comfortable office chair sipping a steaming mug of tea and listening to the gentle melodies of radio two. Perhaps I should explain, for I nor I would expect those following would have anticipated such a luxurious beginning to a long journey around Scotland.

It is the third day of my expedition and I am stormbound.

Before telling you of where I am, I feel it is important to say why I am here.

The idea to kayak around Scotland and climb all the Munros began as a very simple concept, a notion perhaps. “The Doorstep Adventure” a challenge to truly experience the splendour of my own home country before setting further into the world at large.

With the idea born there began a winter spent ruthlessly sanding, gel coating and polishing a 15 year old P&H sirius kayak, to all those family and friends who helped along the way I can only thank you for making a tedious job that little bit faster and oh so much more enjoyable.

Completely re-gel coating a sea kayak, adding a kevlar reinforcement strip to the hull and polishing. Many thanks to all those who helped.

When completing a long passage by boat it is vital that every eventuality must be planned and prepared for, be it river or sea it is highly advised that a kayaker carries a spare set of paddles. On a very tight student budget I decided the cheapest option would be to carve my own. Based upon Greenland paddle design the blades I chose are much thinner than conventional paddles, they are efficient and perform superbly in stiff wind. 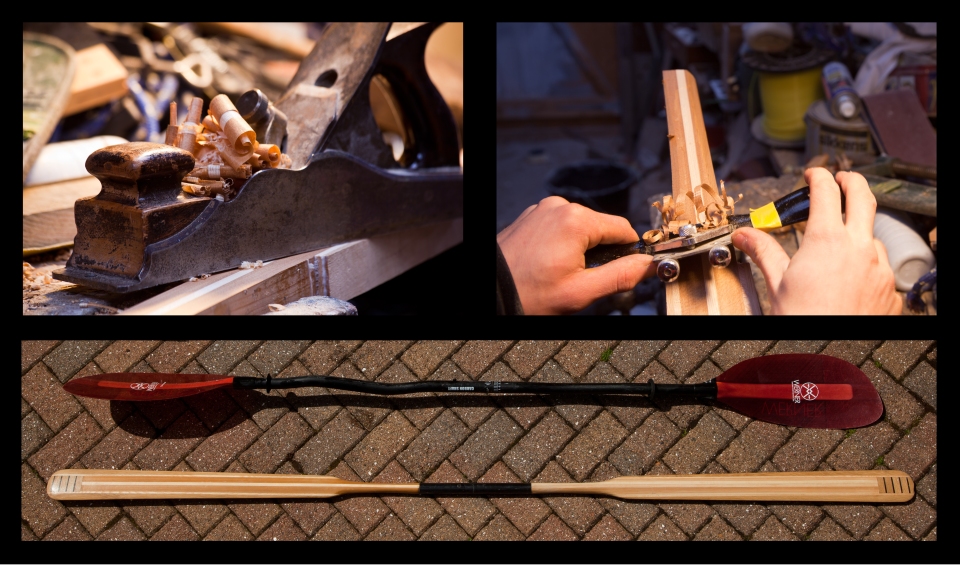 The next greatest expense in an expedition is of course food. Over the winter I was kindly lent a desiccator by Richard Gosling and Sheila Wickens. This allowed home made dried fruit and vegetables to be cheaply produced en mass . . . many nights after sanding were spent chopping various fruits and vegetables (and once the tip off my finger…ouch) to be dried.

I was once told that a good expedition is one where you begin feeling more exhausted than you do when you finish. With months of preparation combined with the mental torture of a final year  university dissertation I felt utterly shattered. With just two days to go it was with great relief to cast library slippers into “the black hole” (our family nickname for the coat cupboard). Only one task remained, to test the boat.

Hauling the beautifully polished 5.2m craft down the beach was an exiting moment, so many months hibernating behind frosted garage windows, spring had arrived and now it was time to play.

I have christened the boat “Sula” after the Scandinavian name for gannet, she glided effortlessly through the water and with a quick dab of the blade turned responsively into the waves. It was hard to believe that this was the same 15 year old boat I had paddled before.

The was but one small problem. . . Sula leaked.

After a panicked inspection ashore it was with great relief to discover only a very small hole on the refashioned fiberglass skeg tube in the stern compartment. It was now the final night before setting off and once again the boat was in garage for fibreglass surgery.

Sula and what kit goes where (Click to enlarge)

By the morning all was repaired, the car was packed and Katie, Paul (Mum and Dad) and I we were on our way south…

Traveling south to the border, on the A835 looking towards Ben Wyvis (currently planned to be my last Munro – January 2014).

After a night of farewells to all my Stirling University friends at the Settle Inn bar, a short drive south promised the chance of sleep. Bursting with anticipated excitement, I was instead given detailed instruction on the calculation of tidal currents and what to expect along the Solway by Paul

For the first few days he would join me as support before allowing a continued passage past the Mull of Galloway on my own.

Our intention was to kayak down the River Esk from Metal Bridge and into the Solway firth. In order to allow us to cut the corner on some sandbanks further downstream we aimed to paddle into the rising tide for the first 30 minutes and ride the falling tide for the rest of the day. This would be done with empty boats to avoid scraping down the shallow river bed, we would rendezvous with relatives further downstream and load up the equipment for the coming days ahead.

By the time we reached Metal bridge there was little time to hang around, Paul and I scampered around the Landrover untying straps and hastily throwing necessary equipment into dry bags. It was a whirlwind of excitement, I had little time to think or ponder on the imminence of my adventure ahead, that would come later. A quick photo and we were off.

A very quick photo at the start before racing to catch the tides (photo A, Stark)

A quick hug goodbye to my Kate and my sister, Emma: a wave to Pippa and Allastair (my aunt and uncle) and I strapped into the boat and hauling with all my might grinded the kayak from the shingle shore and into the Esk. It had begun.

Paul who had left a little earlier was in the distance, pausing for just a second to look back for one final wave goodbye I lost several meters to a stiff force 5-6 wind. It blew directly against my face, paddling with all the strength I could muster I made agonizing progress. . . Stroke after stroke after stroke, I seemed to have moved only a few meters. Looking at the shoreline the wind was whipping past its shore, the tide exacerbated its effect and became disorientating. I could not stop, every stroke stopped lost valuable meters back upstream, both weather and sea seemed reluctant to let me leave. I felt nauseous, I had travelled almost at a sprint pace for 30 minutes but had barely made 500m.

By the first 1km I was absolutely exhausted, my arms burned and chest heaving for air. Was I fit enough for this? Why was it so hard? Rafting to Paul and clinging to the side my questions were answered. The tide was not slack as it should be, it was still rising at a rate of about 4 knots against our travel, in a kayak 5 knots is a fast pace. With the stiff wind in addition this suddenly explained why moving was such relentlessly hard work.

Fighting a 4 knot tide and relentless headwinds (photo A, Stark)

After a brief recovery Paul and I paddled toward the opposite shore, at least to relieve ourselves of some of the wind which was still howling against us. Hugging the banks of the river a counter eddy allowed passage with slightly less influence of the tide much to our relief.

We briefly met the rest of the family and my godmother Marian who had driven to a point downstream to wave and offer a cup of tea. It was very welcome, but there was little time to hang around if we wanted to cut the corner with the tides.

Once again Paul and I headed out into the wind, it was a struggle even to turn the kayaks into the right direction. Over the gust Paul bellowed “Its always been an uphill struggle getting out of England” just as we crossed the border and into the Solway firth.

Heading out into the Solway Firth (photo A, Stark)

As the tide started to ebb back down the Solway the water rose against the wind, waves started to rear into steep walls 2-3ft high. Suddenly propelled by the tides instead of fighting them progress seemed to become easier, I strangely enjoyed the rush of bouncing “rodeo style” through the waves.

The sea was confused between tide and wind, the waves were rearing from all four directions around us despite the wind being firmly in our face. For the next few hours we paddled, teeth gritted in determination with the finishing point in sight ahead. 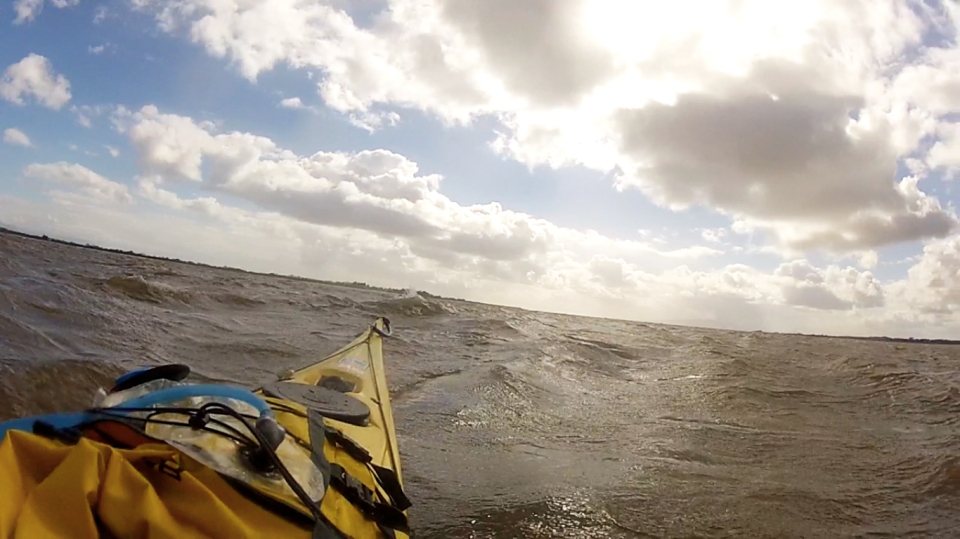 At 5 o’clock I turned inland, for the first time in over an hour I lay back in the seat of my boat and let my arms rest, it felt blissfully good. Allowing the wind to blow the boat onshore rather than paddle I turned the bow into the mud and landed safely ashore.

Without the frantic sweeping of paddles I found myself quickly becoming cold, wasting no time Paul and I portaged the boats across the mud and sand flats and up onto the grassy shoreline. At low tide the distance up the beach was 100 meters or more, we had to take several breaks to rest already exhausted arms. 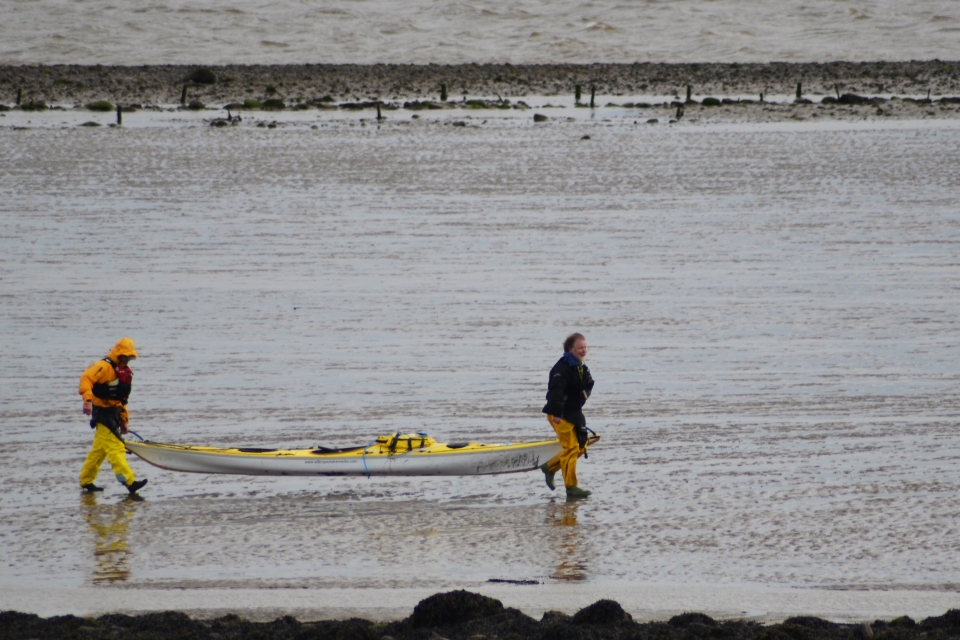 Exhausted, the final few steps after a long days paddle. (photo A, Stark)

I was offered a bed for the night with Pippa and Allastair, who live in Dumfries; the promise of a warm bed and roast dinner seemed too great to miss. In the evening  the weather forecast was predicting gales in a few days time, tomorrow we might make it as far as Southerness Point but then would have to wait it out. In the morning it was obvious that the weather had decided otherwise.

High winds against us yet again.

Back onshore, the wind was much greater than expected, it had risen to a force 5-6 and was due South, not west as forecast. It would have been manageable conditions for a short hop, but not for 20km between un-landable mud flats. It seemed after the first day I was already stormbound to the shore. 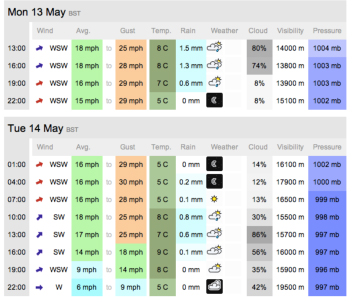 Weather Forecast: Certainly not ideal for the Solway Firth

Posted on May 14, 2013 by willcopestakemedia

← The faces in the frame
Southerness to The Mull of Galloway →

One Comment on “Setting forth to Esk-ape to the Solway Firth.”